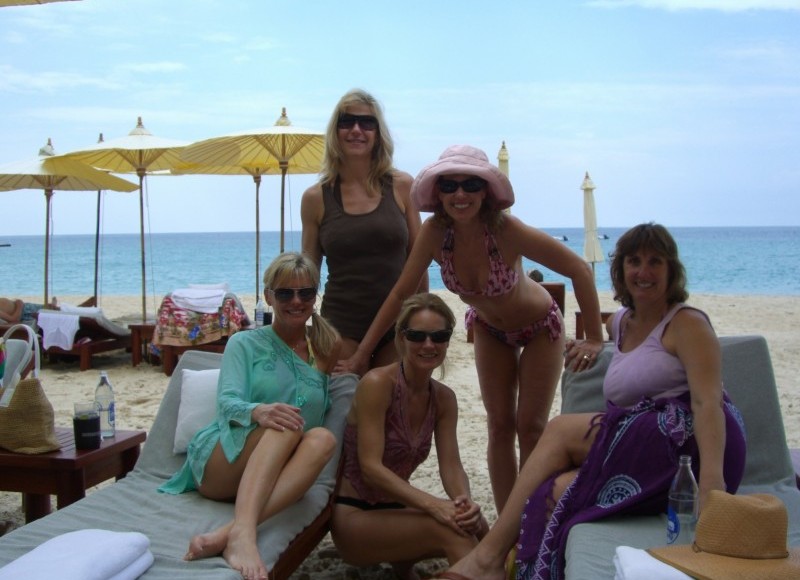 In 2008, I unexpectedly found myself going to Thailand. A friend had purchased a week’s rental of a grand mansion in Phuket, (pronounced pooh-ket, not f*ck it) Thailand at his son’s private school silent auction. He gathered up eight friends to split the cost, and at the last minute, most of them were unable to make the trip. In a desperate move, he called my husband and I and asked if we would be interested in buying the trip from him at cost. We jumped at the chance, quickly found eight other eager travelers, and were ready to embark on our adventure.

The mansion was a series of five individual guest houses designed in ancient Ayutthaya architecture, with a central pavilion for dining, exercising, shooting pool, and relaxing. And, amazedly, the mansion came complete with a staff of five to cook all meals, clean, do laundry, drive, and even unpack for us! It was located on the grounds of the world famous Amanpuri Resort on the Andaman Sea. 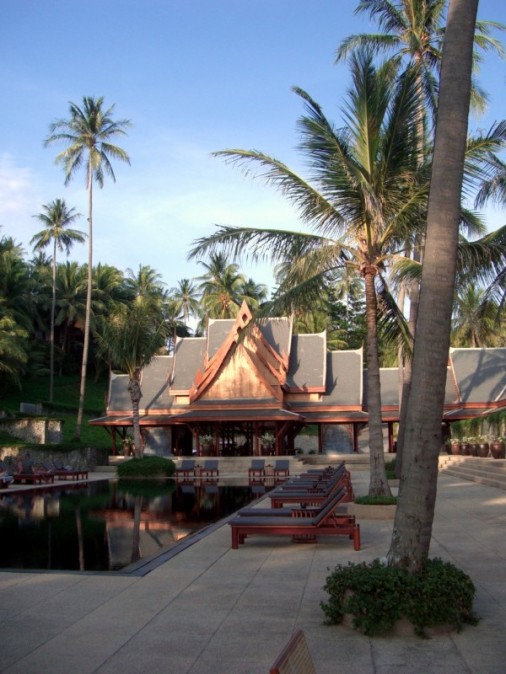 At our first meal, I was stunned to see the table decorated with roses, birds, and leaves all carved from fruit. One day we were lucky enough to watch the staff as they carved these masterpieces.

Carving a watermelon in Thailand 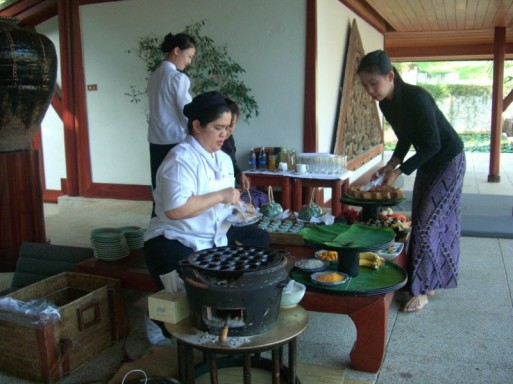 Carved roses made from fruit

Carving a bird in Thailand 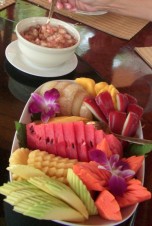 It’s a tradition in Thailand to light paper sky lanterns on the beach and to float them up and out over the ocean at night. A sky lantern is essentially a small hot air balloon made out of paper that has a wire construction at the bottom where the fire is. Fire generates hot air, which is lighter than the cold air, and it lifts the paper lantern. It is symbolic of one’s worries floating away and out to sea. It’s hard to have any worries when you are living in a mansion in Thailand! 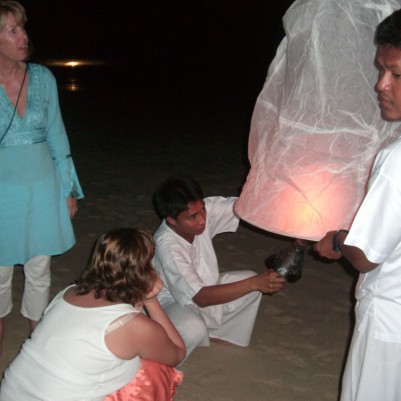 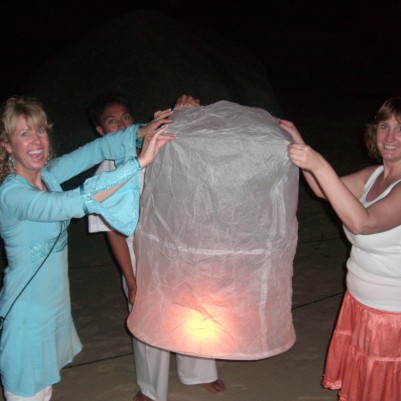 One day we decided to ride elephants at Peun Chang Taweechot. I now know that this is considered unkind to the elephants and that they should not be in captivity, used for tourist’s pleasure, and poked with sharp sticks to learn how to walk the paths. I heard this from a friend who made a movie about elephants. How I Became An Elephant . Once we hopped on top of the elephants, Scott sensed that our elephant didn’t like his 200-pound body sitting there, and Scott refused to be buckled in. Scott said he needed to be able to do a jumping dismount in case our elephant freaked-out. I wasn’t quite sure where this was going to leave me since I was securely buckled into the basket on top. Under the freaked-out elephant? 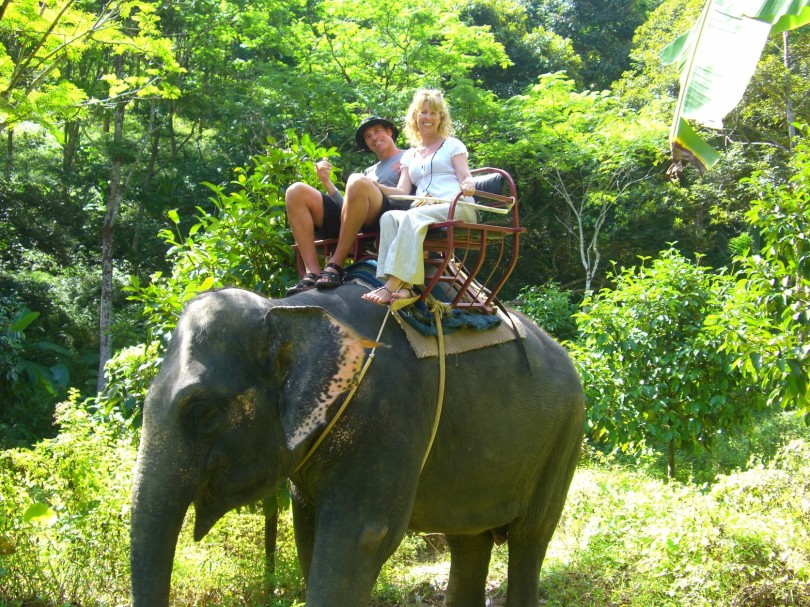 My scariest day was our Kayak Adventure. We took a boat (along with many other tourists) out to the hongs. caves, and lagoons in Phang Nga with a company called Sea Canoe. On our way out they told us the do’s and don’ts in a combo of Thai/English with posters to get their point across. The posters showed not to stand up in your kayak, not to yell in your kayak or you might scare the wildlife, etc… Then, I saw the SCARY poster. It showed that we would need to lie down in the kayak to clear the rock wall above our heads. CLAUSTROPHOBIA! I raised my hand and pantomimed that I had claustrophobia. I asked, “How long are we in a rock tunnel lying down?” They replied, “Not long…five minutes.” My heart started to race and I could feel the panic coming on. My comrades encouraged me. “You can do it!” “Pretend you’re napping!” “You’ll be with all of us!”

This is a Hong

How to lie down in a kayak

Quite reluctantly, I agreed to try it. When we got to the the entrance to the hong, and the rock tunnel, I laid down, pretended I was in my bed, talked to myself, and made it through the longest five minutes of my life. It paid off, since the inside of the hong was breathtaking, with green water, bird calls, monkey hoots, and utter silence. We stayed for a while and then our guides announced that the tide was rising and we MUST leave right away in order to clear the rock tunnel. WHAT?  The tide was higher? PANIC! As we lined up to exit the hong, I once again laid down, closed my eyes, and then I realized my kayak had stopped. I was stopped in a rock tunnel. No air! No escape! My fears were becoming reality.

We were stopped because my girlfriend in the kayak in front of me has an ample bosom, and her breasts wouldn’t clear the rock ledge even though she was lying down! The guide in her kayak had to let air out of her kayak for her to clear the tunnel. This took quite a while! It’s no wonder I decided to call it a day after that. Little did I know that the kayak paddle after lunch was into a cave with bats!

We had a lot of comical adventures on this trip. For example, one night in Phuket our restaurant magically turned into a club when we finished dinner. We were shocked when our waiter became a drag queen and impersonated Diana Ross. Two husbands in our group ordered custom made suits in town. Unfortunately, the husbands didn’t return to the tailor for the required second fitting. When the suits were shipped home, they were ridiculously missized. We had masseuses come to the mansion for a spa day. Afterward, us women had quite a laugh when we compared stories about the “chest” massages we all seemed to get. The men went go-cart riding one day. I was all ready to join them until a girlfriend mentioned that there were probably lice in the rental helmets. Ugh, immediately I decided to pass. It was certainly a trip to remember, and one that would be difficult to duplicate. 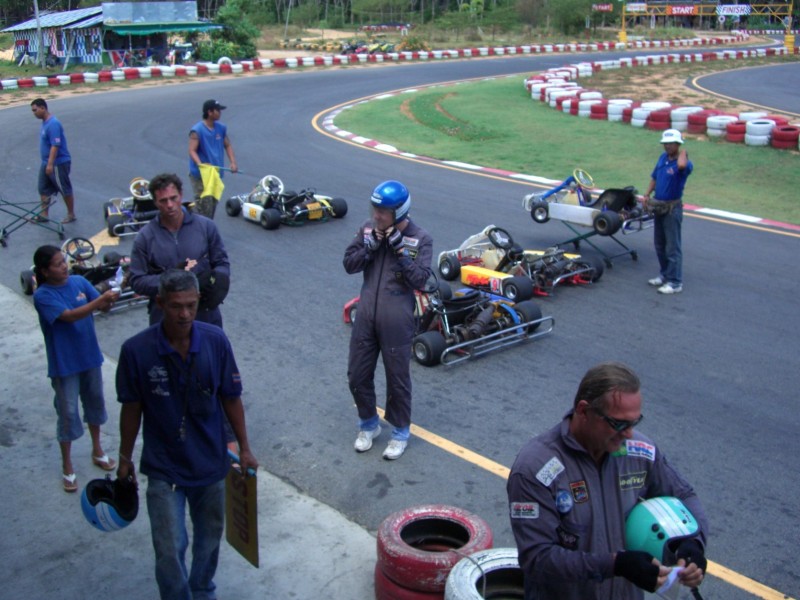 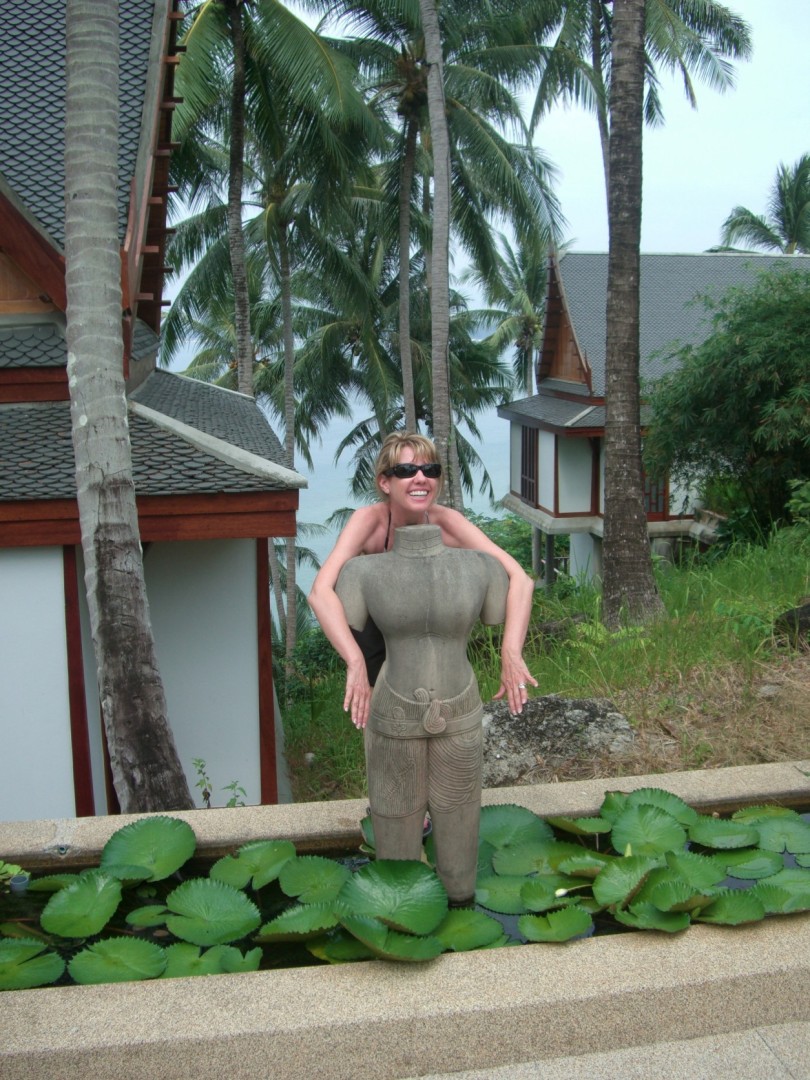 I Flew To India For A Wedding

A Luxurious Search For A Tiger