I entered Tokyo and the world of fine prix fixe dining for four nights, and I came out over $1000 poorer. My adventure started with the Molecular Tapas Bar at the Mandarin Oriental. There are two seatings per evening, and only eight lucky recipients get to dine per seating. The meal is an adventure in gastronomy, which is a lot like playing with your food during chemistry class and seeing what weird (exploding) concoctions you can come up with. I sampled food that looked like breakfast but was actually a savory entree in disguise, a liquor flask filled with broth and paired with a foie gras spoon, and a cigar filled with pork instead of tobacco.

By the following evening, it was time to try a top rated sushi bar with a famous chef. We selected  Kyubei,Ginza, the five story sushi den of Chef/Owner Yosuke Imada, whose father opened the restaurant in 1936. Each sushi chef at Kyubei serves no more than 6 people, after training for 10 years behind the scenes, and most work the private rooms of the restaurant. The place to see and be seen, however, is the downstairs small sushi bar. We were seated at the prestigious side of this bar, and we later found out that Steven Spielberg, Starbuck’s Chairman Howard Schultz, and Nicholas Cage had all adorned our seats. There are 35 kinds of fish brought in daily from the Tsukiji fish market. At the crack of dawn, Scott and Mitch joined our sushi chef at the Tsukiji market to watch him select the fish for our “Omakase” (selected by the chef) meal that evening. I have to say that some of it was the best sushi and some of it was the weirdest/grossest sushi I have ever eaten. At one point, the chef brought out Odori Ebi (live shrimp) that jumped off the plate. He promptly cut off their heads, immediately served us their bodies while their legs were still moving, then returned the fried heads to us to sample next. I ate Uni (sea urchin), Ankimo (monkfish liver), and O-toro (fatty tuna belly). The sushi is served one at a time, as soon as it is made. Once our chef noticed that Scott was left-handed, he immediately began placing his sushi at a different angle. Attention to detail at Kyubei is beyond compare. 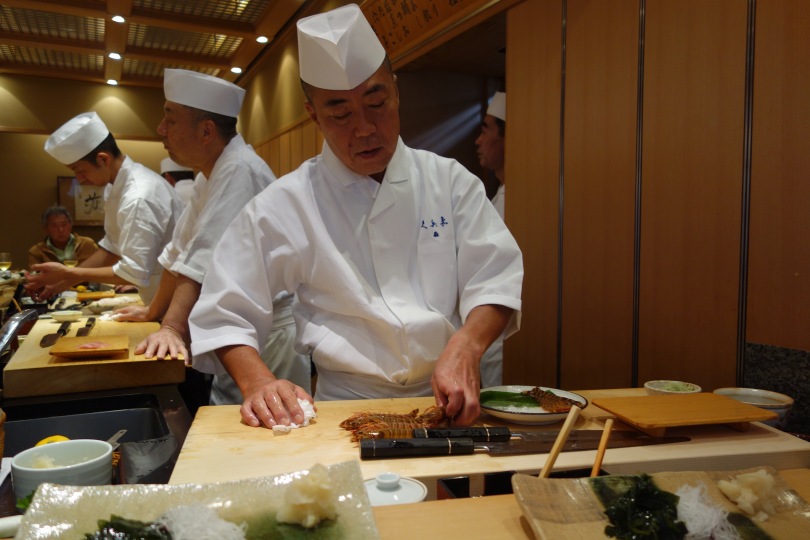 The rest of the group had to pull my leg to go for “Okonomiyaki” (Japanese pizza) for lunch the next day at Asakusa. I’m not one to shy away from pizza, but it’s the dough I like. On the Okonomiyaki, the dough is actually shredded cabbage mixed with a ton of mayonnaise. Then it’s topped with MORE mayonnaise, BBQ sauce, dark meat chicken with the skin on, and green onions. The group liked it; I didn’t. 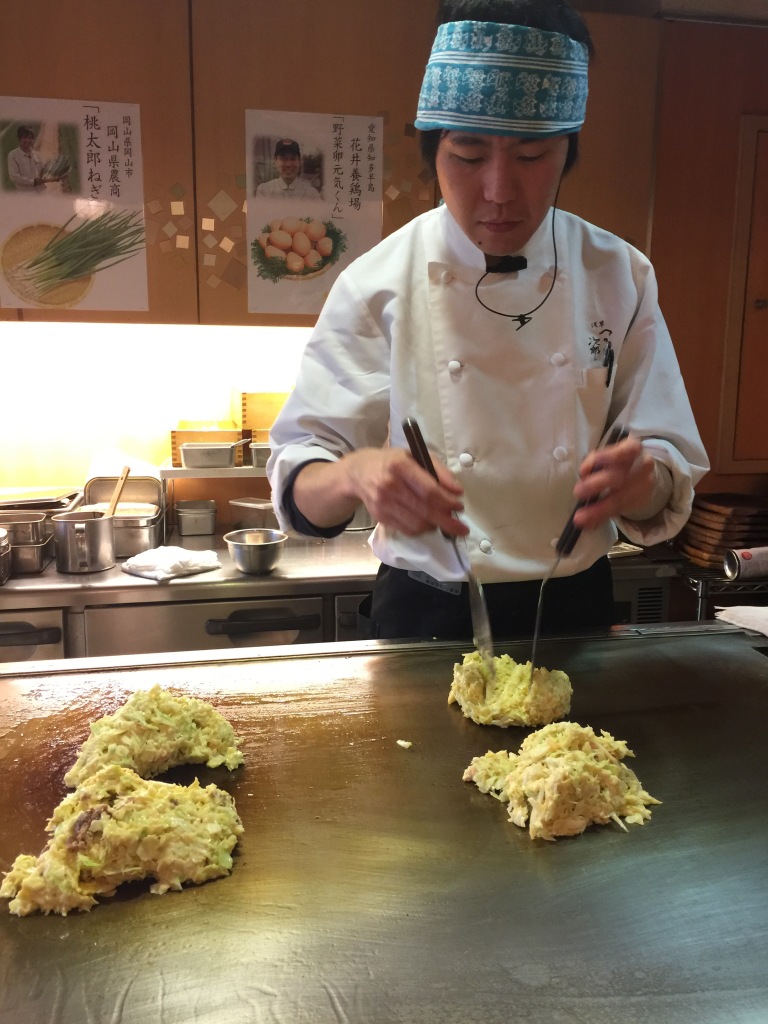 We had been anxious to try a Robata bar, so we hit Inakaya Higashiten. This is a lively form of eating, where the chefs yell and chant throughout the meal. I think they were discussing the food orders, but I can’t be sure. We sampled everything on the grill from vegetables to meat, chicken, and fish. The exciting part was that when each item was done being grilled, the chef handed it to us on a large paddle. 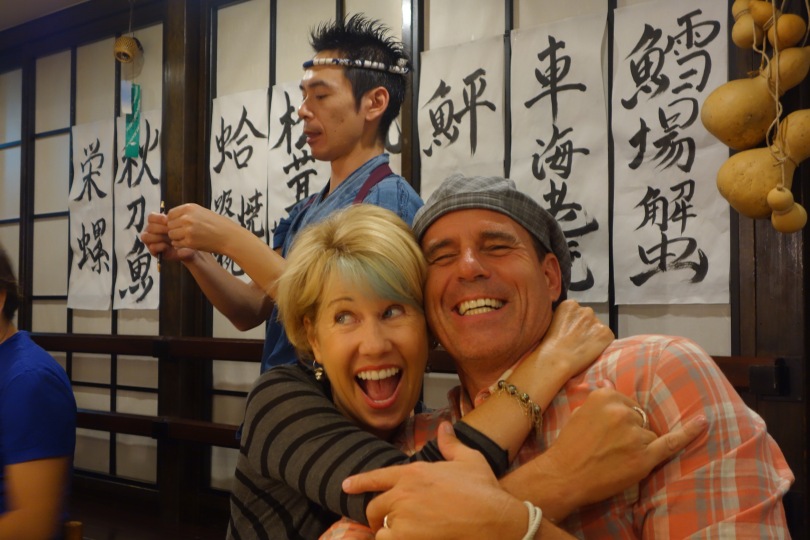 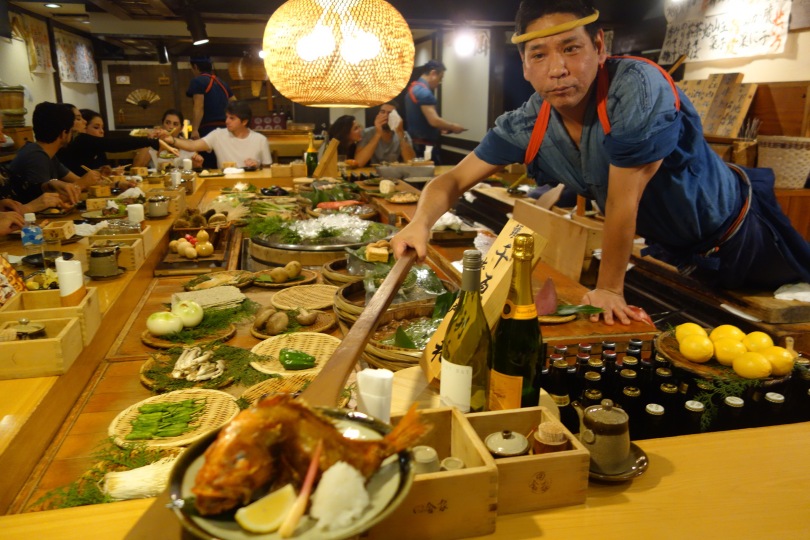 For a change of pace, we opted for French food at three star Pierre Gagnaire on the 36th floor of the Intercontinental Hotel. Children under seven aren’t even allowed. Our prix fixe menu consisted of several appetizers, an entree, and a platter of desserts. It was a little too fussy for my taste, but the view and service were spectacular. 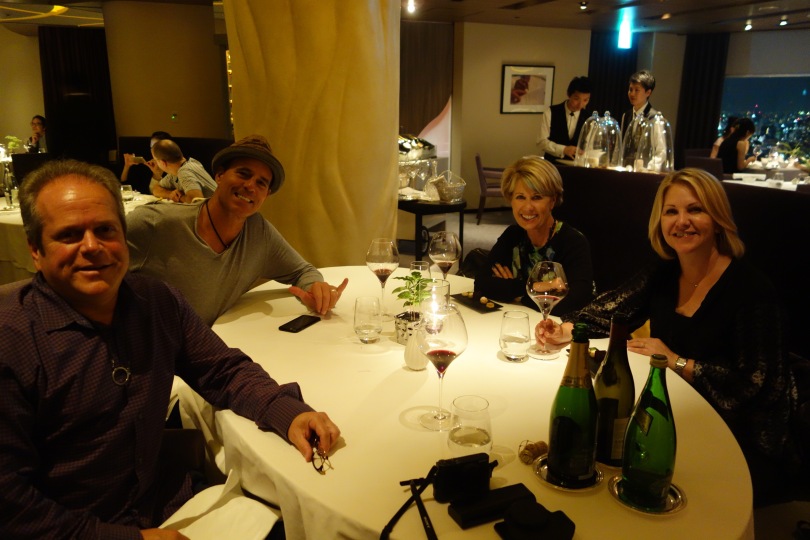 Lastly, we hit a Gyoza (grilled dumpling) restaurant in Japan for what my brother described as “the best pot-stickers in the world.” After waiting in the line outside Harajuku Gyozoro with the locals, I would have to agree on my bro’s assessment. The Gyozas rocked!

So, would I do it again? Was it worth the expense? My answer would be probably no. Give me a bowl of pasta or a burger, and I’ll spend the rest of the money on clothes.